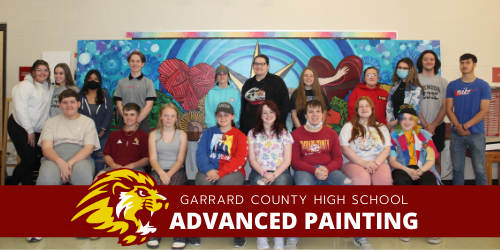 The 2022 Advanced Painting class collaboratively planned, designed, and created the Mural entitled, Close Knit, to visually represent the formative experience of growing up in Garrard County. Students created a survey to gather information about students' different perspectives about their community experiences. The art students identified strong themes that resonated from the feedback found in the surveys. The title, Close Knit, came from the recurring phrase describing Garrard as a small, rural town full of people closely tied together. Alison Stiles, class of ‘22, designed the heart shaped ball of yarn to communicate this theme. The class chose to add an unraveled string of yarn throughout the mural to represent the students journey in this close knit community. “You may leave, but you take a piece of Garrard with you as you go.” The theme of rural landscape can be seen in the barn, silo, rolling hills, and raked hay fields. Students realize that agriculture, though not as prevalent as it once was, is still valued for the rural landscape and farming culture. The image in the center borrows the Garrard Judicial Center’s fountain compass, designed by Riley Winkler class of ‘24, reinterpreted as the sunrise over the classic Kentucky image of two friends shaking hands as seen in our State’s flag, designed by Abigail Nicodemus class of ‘22. Together, the two symbols represent the students desire to find their direction, realizing that teachers are guiding lights as they learn and grow, and show the welcoming nature of Garrard countians. Audrie King, class of ‘22 chose to use the sunflower to represent Garrard students because they are bright, grow quickly, and turn toward the light (knowledge) for strength. The second large heart wrapped in an embrace is designed by Miles Terry class of ‘24. It represents a repeating theme that students feel that their peers are accepting and friendly. They recognize and value the diversity in our community. Riley Winkler, class of ‘24, also designed the mascot montage to show the importance that each school has on the success of all its Garrard graduates. Lastly, the background pattern of bubbles were added to communicate the innocence and youthful nature of the mural. This mural was created by the students, for the students of Garrard. The bubbles are symbolic of the hopes and dreams that each student has to become successful citizens. This project was led by Kristin Long, visual art teacher at GCHS. 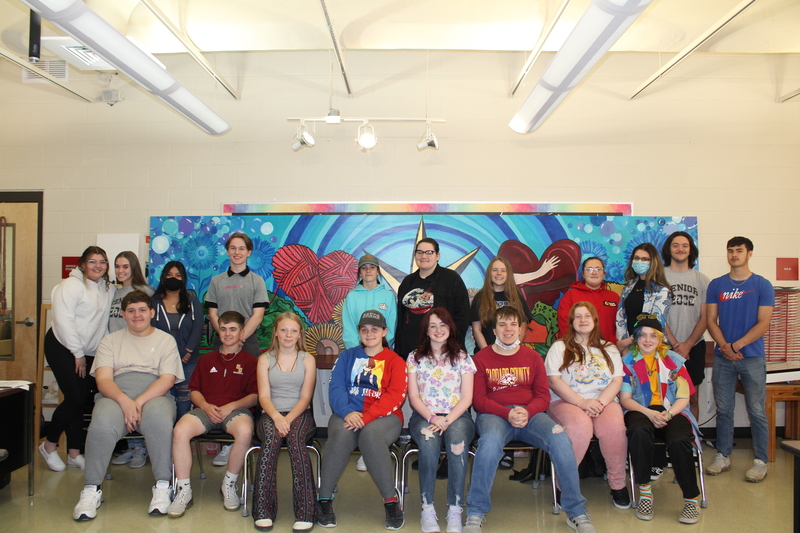