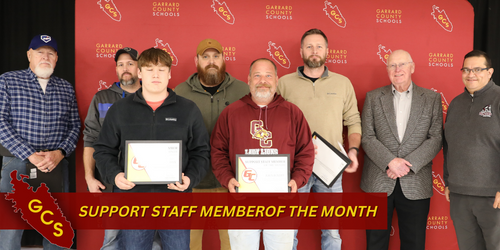 The days prior to Christmas were some very cold days. On Christmas Day, the cold won, and a sprinkler head at GMS burst. When notified of the issue, five of the six members of the maintenance team, plus one student work left the comfort and warmth of their homes on Christmas Day to deal with the problems created by the burst sprinkler head. There was no requirement that they do so. But they did. They reduced the damage that could have occurred and worked to limit the damage that was already occurring. Over the next few days, additional pipes burst in various locations and the team was on hand to reduce the damage and correct damage that may have already occurred. Many of our staff would have returned to work in January with no idea of the amount of time and effort the crew put in to make school a possibility. This group is a group of unsung heroes for their daily work, but they are especially deserving of recognition for what they did the last two weeks of December 2022.